Don't let her youthful looks and boundless energy fool you! This captivating woman presents with over fifty years of professional theater and public speaking experience, spanning many venues, audiences, and cities throughout the United States, Canada, and Australia.

Since she was a child, Wambui Bahati has enjoyed entertaining others. She is a survivor of mental illness and domestic abuse. She has combined life lessons and wisdom gained through experiencing these adversities with her gifts as a performing artist. Wambui has inspired and motivated thousands of people in powerful and unique ways.

Wambui Bahati is her legal name taken on during what she refers to as a "re-invention" of herself. In Swahili, Wambui means singer of songs. Bahati means my fortune is good. At birth, she was named after her father. Her birth name and her early professional theater name was John-Ann Washington.

Wambui's regional and touring credits include starring roles in:

Wambui wrote, produced, and stars in the one-woman musical Balancing Act about how mental illness stole her life – and how she took her life back. And the play I Am Domestic Violence. Both of these shows have received international acclaim for the unique way they provide outstanding entertainment while dealing with critical issues in our communities.

Ms. Bahati possesses the uncanny ability to create custom shows and presentations based on a specific theme or topic.

Some of her awards include:

The native Greensboro, North Carolinian, lives in New York City and is the proud mother of two adult daughters and two granddaughters. Over the past six years, Wambui has shared her love of crafting by providing various crafting tutorial videos to a Netherlands-based company, and on her YouTube channel, Wambui Made It.

Books that she has written include autobiographical,
﻿﻿﻿﻿﻿﻿﻿﻿﻿﻿﻿﻿You Don't Know Crazy - My Life Before, During, After, Above, and Beyond Mental Illness﻿﻿﻿﻿ 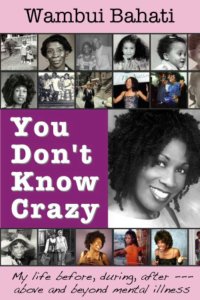