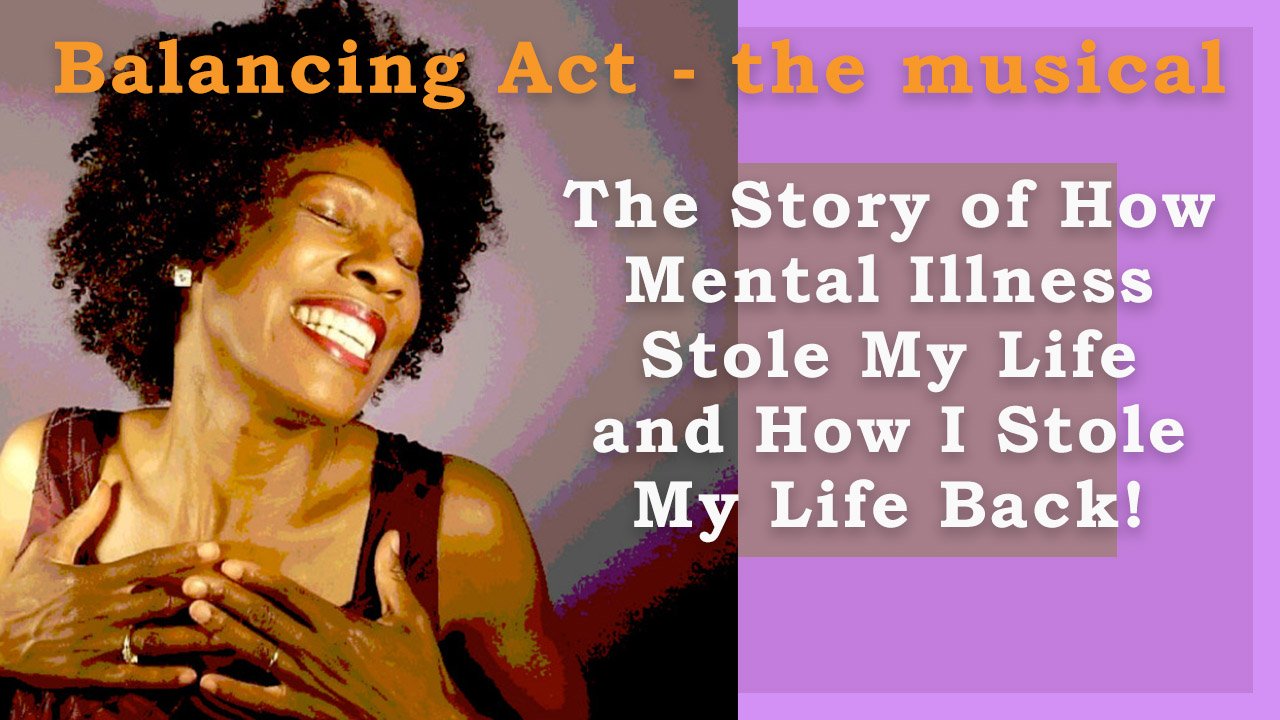 This is the story of how mental illness stole her life and how she took her life back!

How Balancing Act - the Musical was Born

In 1996, as Wambui Bahati was recovering from years of dealing with emotional and mental health issues, doctors, hospitals and large amounts of medication, she was asked the question: "What would you do if you knew you could not fail?" Her answer was, "Perform again."

However, because of her mental health history, she was certain that no one would hire her again. So she decided to create her own musical show for herself. Advice from other writers was, "Write what you know about." After more than 35 years as a patient in the mental health system, she decided to share her story.

In 1997, Beth Melcher, the president of the North Carolina National Alliance for the Mentally Ill saw the debut performance of Balancing Act in Greensboro, NC. The following week she applied for a grant to sponsor a ten city tour of the show in North Carolina.

After the North Carolina tour (1998-1999), other cities requested the show. The show has been presented as the ‘keynote’ performance at major conventions and conferences across the United States.

Based on the success of the show, Wambui was awarded the 2001 Lionel Aldridge Award. This national honor recognizes individuals who provide extraordinary service and courage on behalf of people with mental illnesses.

Wambui Bahati, a.k.a. John-Ann Washington, tells the real story in

". . . a sometimes humorous, yet always honest true story of how mental illness (severe bipolar disorder) stole Wambui's life - and how she took her life back!" - The inspiration for the book, You Don't Know Crazy In this one-woman musical, Wambui shares her powerful story of growing up in Greensboro, North Carolina and launching a theatrical career on Broadway, only to have her success cut short by mental illness.

From her ordeal, she emerges with strength and awareness of an inner power she did not know she had. Wambui 're-invents' herself, becomes healthy, happy, and an inspiration for others.

“Balancing Act is powerful and funny and moving, and tells the story of bipolar mood disorder without prettying it up,” said Beth Melcher, executive director of NAMI of North Carolina. “Besides portraying the disorder so well, the story is a story anybody can relate to.”
—News-Argus
Goldsboro, NC

"Congratulations on an outstanding success. Everyone in our group of 5 (including 3 psychiatrists) thought the performance was wonderful. Ms. Bahati struck a spectacular balance between educating and entertaining, in my judgment the highest purpose of theater. She has put her life in the service of others doing what she does best, and it works. I would recommend it to anyone."

—Burton Reifler
Dr. Reifler is chairman of the Department of Psychiatry &
Behavioral Medicine at Wake Forest University School of Medicine