"I Am Domestic Violence"
Reviews and Testimonials

...Yet Rivers, who has appeared in such films as Zorro, Amistad and Hulk, did not even give the most dramatic presentation of the morning. His keynote address came after Greensboro, N.C., actor Wambui Bahati presented a part of her one-act play I Am Domestic Violence. Bahati, another survivor, took on the persona of abuse and loudly challenged the audience not to ignore the destruction it wreaks. With the use of various coats and blouses, she then assumed the role of seven different characters to illustrate that domestic violence knows no boundaries.

"Somebody run and tell somebody," Bahati crooned. "This ain't how it's supposed to be."

The information that you share with the world through artistic means is sorely needed in our turbulent society. People are still talking about the “I Am Domestic Violence” that you performed at last year’s conference . . .

Thank you for coming to our NCCADV conference and performing DOMESTIC VIOLENCE …something I will NEVER forget. Your passion for this crime really showed through your performance. THANK YOU!

Cleveland County Abuse Prevention Council attended the NC Coalition Against Domestic Violence Conference in Chapel Hill. We were very impressed with your presentation during the Plenary Session ...

In recognition of Black History Month, the Domestic Violence Internship Program at North Carolina A&T State University is sponsoring a display that highlights significant achievements made in the area of domestic violence. "The Souls of Black Folk: Centennial Reflections" is a display honoring prominent African Americans in the field of Domestic Violence. The profiles of twenty-two domestic violence advocates will be on display in the first floor lobby in Gibbs Hall throughout the month of February.

Teacher workdays are a chance to sleep in and watch TV for most students.

But more than 200 local teens got up early on their day off Monday to learn about social issues such as domestic violence, voting, AIDS and drug abuse at the 2004 Youth First Teen Summit.

The issue of domestic violence also topped the summit's agenda. Keynote speaker Wambui Bahati, a Greensboro-born Broadway actor , gave an enthusiastic performance of her one-woman show, "I am domestic violence," changing costumes and walking through the crowd.

"It doesn't look like I'm going anywhere any time soon," Bahati said. "Until you decide I really am a problem, then fasten your seatbelt - it's going to be a bumpy ride."

The Champion Coalition, a project of the Junior League of Greensboro, brought Bahati to the summit.

Laura Simpson, Champion Coalition chairwoman, said she hoped Bahati's performance "would let students know domestic violence is not normal and there are places they can go for help."

"I Am Domestic Violence"
Reviews and Testimonials
[Testimonial verifications upon request.] 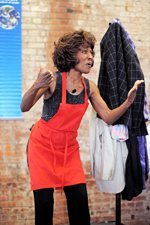 Wanted to let someone know some of the impact Thursday night's play [I Am Domestic Violence] had on victims and abusers. I brought 4 women to the play from a treatment center. Three were victims, one was an abuser. After the play, we had a group session to process the reflections and feelings they were experiencing. They all 4 loved the evening, the play was so powerful . . . There were awesome testimonies to the strength they got from watching themselves on stage.

You were so awesome! I couldn't have asked for a more personable, entertaining, gracious and energetic presenter! With over 300 in attendance, I know you had an impact on many others. 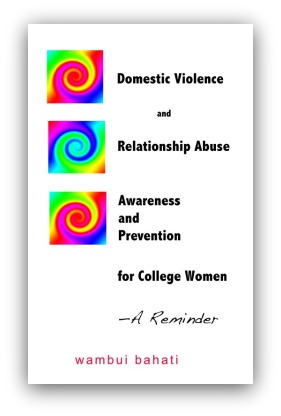